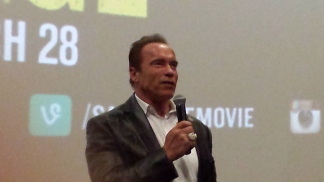 Terminator and producer Bill Block decided to show up and introduced the movie. He and his famous line, “I’d be back!” were present and cheered up the crowd while most people were too busy taping and taking pictures of him. He looked energized with a face looking shiny.

The movie plot was a bit silly about a bunch of DEA agents who were party animals, drug addicts, and alcoholics as part of their stint so they can infiltrate the drug lords and other gangster groups, mainly from Mexico. The plot sounds familiar with the exception END_OF_DOCUMENT_TOKEN_TO_BE_REPLACED

A movie about 2 undercover agents accidentally crossed each other, a movie where good guys gone bad, and bad guys, oh well, still bad. It’s got some funny lines and an okay plot if you want to see lots of ammos and familiar scenes.